Jaipur also popularly known as the Pink City, and is the largest city located in the semi-desert lands of Rajasthan. The city which once had been the capital of the royalty now is the capital city of Rajasthan. Jaipur was founded in 1727 by Maharaja Sawai Jai Singh II who ruled from 1699-1744 and initially his capital was Amber, which lies at a distance of 11 km from Jaipur. He felt the need of shifting his capital city with the increase in population and growing scarcity of water.

The King consulted several books on architecture and architects before making the layout of Jaipur. Finally under the architectural guidance of Vidyadar Bhattacharya, (initially an accounts-clerk in the Amber treasury and later promoted to the office of Chief Architect by the King) Jaipur came into existence on the classical basis of principles of Vastu Shastra and similar classical treatise. It is part of the Siwalik Hills ranges. It is 220 kilometres from the nearest city Guwahati and is also the district capital of the West Garo Hills district. It is filled with small rivulets and green valleys all around. The principal languages are Garo, ( Hajong language/Hajong ), Koch language/Koch, Bengali, Hindi and English. In 1973, the town was made the seat of the Roman Catholic Diocese of Tura.
After waging several battles with the Marathas, Maharaja Sawai Jai Singh II was keen on the security aspect of the city. Being a lover of Astronomy, Mathematics and Astrophysics, Jai Singh sought advice from Vidyadhar Bhattacharya, a Brahmin scholar of Bengal, to aid him to design many other buildings including the Royal Palace in the center of the city.
The construction of the city started in 1727. It took around 4 years to complete the major palaces, roads and square. The city was built following the principles of Shilpa Shastra, the science of Indian Architecture. The city was divided into nine blocks, of which two consist the state buildings and palaces, with the remaining seven allotted to the public. Huge fortification walls were built along with seven strong gates.
The very structure of Jaipur resembles the taste of the Rajputs and the Royal families. At present, Jaipur is a major business centre with all requisites of a metropolitan city. Makar Sankranti, Gangaur, Elephant Festival, Teej are some of the famous festivals. View More

How to Reach Jaipur

By Air
Jaipur has an airport called Sanganer, 15 kms from the city, which connects Jaipur to all major airports in India through direct flights. It has regular flights to Delhi, Kolkata, Mumbai, Ahmedabad, Jodhpur and Udaipur.

By Road
The bus service between Jaipur to Delhi by Rajasthan State Road Transport Corporation with buses approximately every half an hour both sides. There are several types of buses including Deluxe, AC and the superior AC Volvo buses. From Delhi you can board the bus from Bikaner House on Pandara Road next to India Gate. From Jaipur you can board the bus from Narayan Singh Circle or the main Sindhi Camp bus stand.

By Rail
Jaipur has a railway junction, which connects Jaipur with the metros and all the major cities of India. Apart from these trains, a specialty train called 'Palace on Wheels', which leaves from Delhi and connects a number of tourist attractions. Other trains are the Shatabdi Express and the Intercity Express. 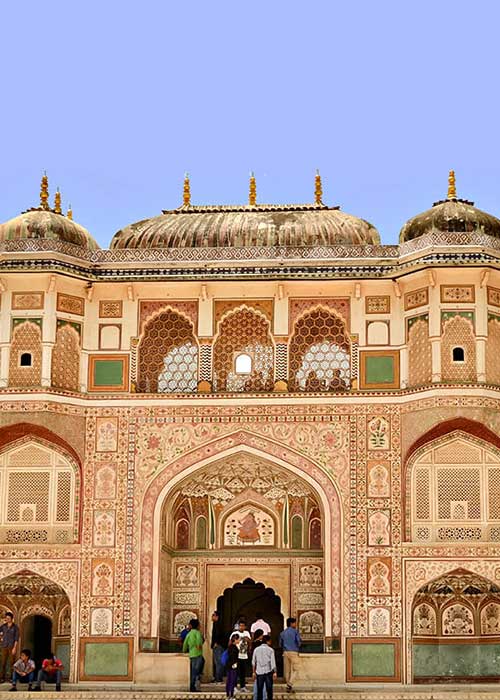 Amber Fort is located on top of a hill which is 11 Km away from Jaipur. Amber Fort is known for its unique artistic style, amber fortblending both Hindu and Muslim elements. The solemn dignity of its red sandstone and white marble pavilions, when reflected in the lake at the foot hill, is a sight to behold. The original palace was built by Raja Man Singh.

Sheesh Mahal chamber of Mirrors. Diwan-e-Am or the Hall of Public Audience is a beautifully proportioned hall open on three sides and stands on two rows of ornamented pillars. Diwan e-Khas or the Hall of Private Audience has delicate mosaic work in glass. Sukh mandir is guarded by sandalwood doors inlaid with ivory. 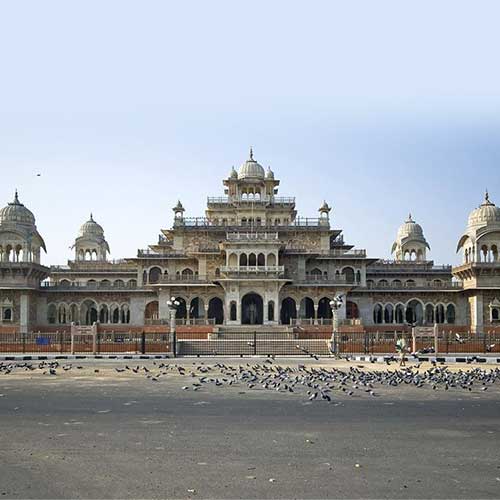 This museum is supposed to be the oldest museum of the state. Colonel Sir Swinton Jacob albert halldesigned it in 1876 to greet King Edward VII as Prince of Wales on his visit to India. Positioned amidst the gardens of Ram Niwas Bagh in Jaipur, 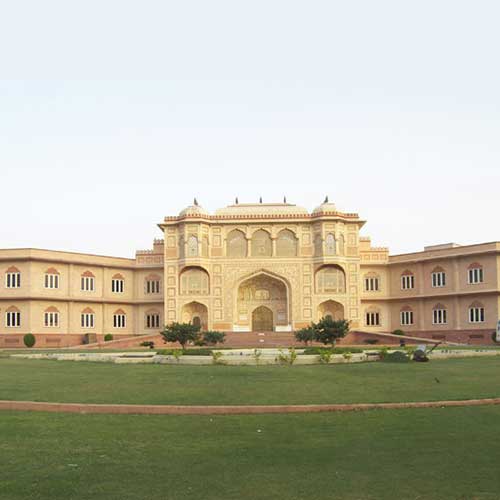 BM Birla's Science and Technology Centre is a constituent unit of Birla Institute of Scientific Research (BISR) Birla Planetariumthat owes its existence of renowned industrialist Mr. B.M Birla. Located in the heart of Jaipur, the planetarium is a sprawling 9.8 acre complex that houses a science museum, a library, a computer science 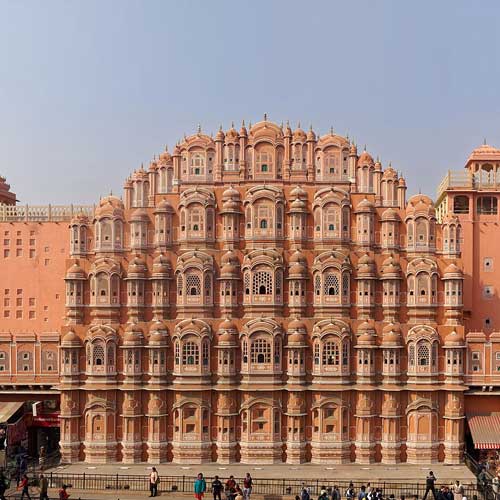 Hawa Mahal is also called as Palace of Wind or Palace of Breeze. Hawa MahalIts unique five-story has 953 small windows called jharokhas decorated with intricate lattice work is a fine piece of Rajput architecture, built in 1799, by Maharaja Sawai Pratap Singh, and is the most recognizable monument of Jaipur. 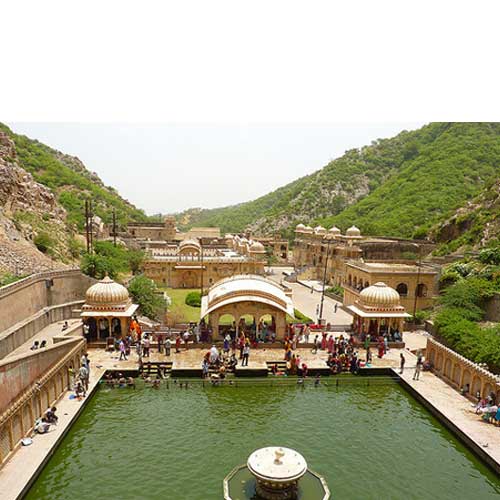 Galtaji is a holy pilgrimage of India, Galtajilocated 10 kms away from Jaipur in Rajasthan. The Temple of Galtaji is famous for its natural water springs. Galtaji is considered holy place, as Saint Galav spent his life meditating here. However, the temple was built mach later by Diwan Rao Kriparam, a courtier of Sawai Jai Singh II, in the 18th Century. 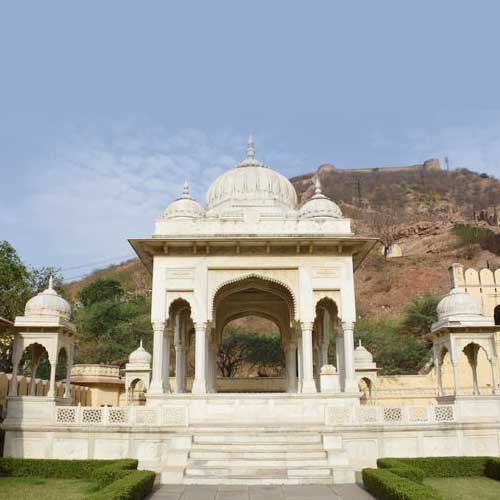 Located off the Jaipur-Amber road, GaitoreGaitore is the final resting place for the maharajas of Jaipur. Set in a narrow valley, the cenotaphs of the former rulers consist of the somewhat typical chhatri or umbrella-shaped memorials. 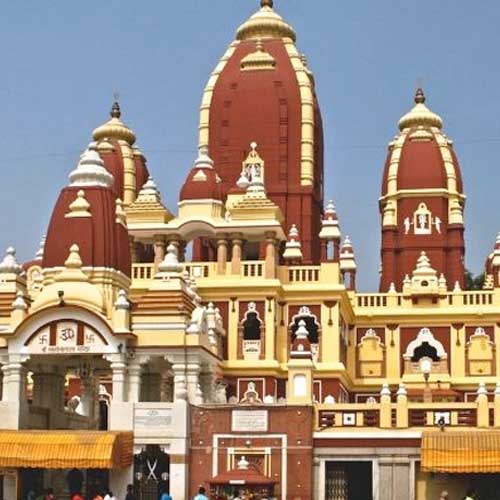 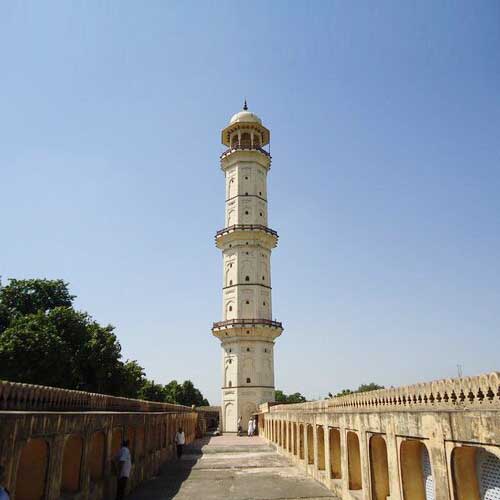 Swargasuli also known as Isar Lat meaning the heaven piercing minaret was built in 1749. SwargasuliIt is located at the junction of the Tripolia Bazar and the Gangori Bazaar. Isar Lat or Swargasuli is a seven storey minaret built on the lines of the Qutub Minar and Kirti Stambha of Chittaurgarh. 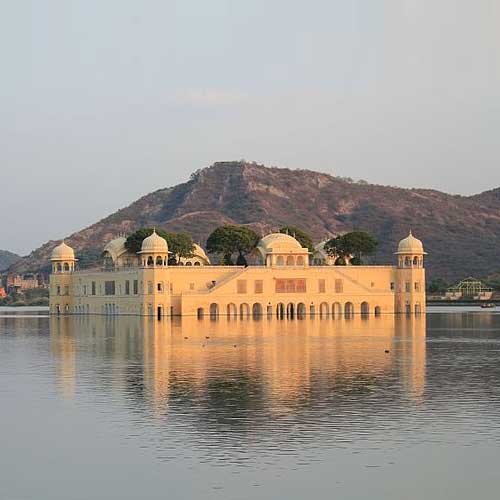 This is built to be a pleasure palace for the royal family in 1799, Jal MahalJal Mahal Palace (translated as Water Palace) of Jaipur is an extremely romantic place with its red sandstone intricate architecture casting beautiful reflections in the calm waters of the Man Sagar Lake, full of hyacinths. Surrounded by Nahargarh Hills 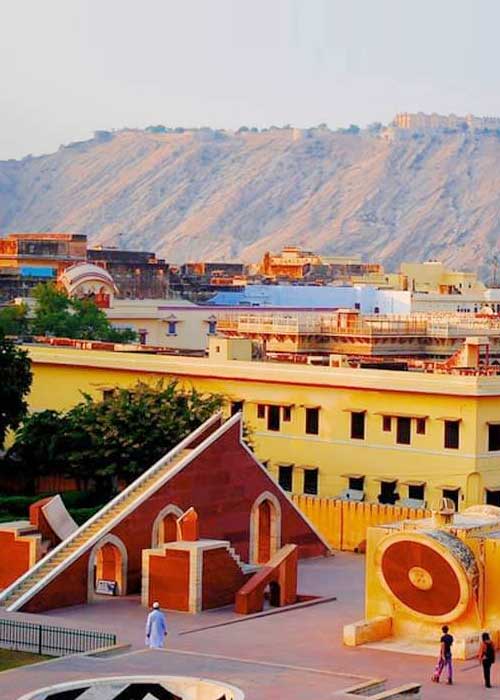 Jantar Mantar is the most famous place to visit in Jaipur housing the collection of architectural astronomical instruments built in 18th century by Maharaja Sawai Jai Singh II. Jantar mantar consists of 13 different instruments of various geometrical forms for calculating the time of day, the heights of heavenly bodies, predicting eclipses. These instruments are of gigantic sizes and can make accurate measurements within one second.